Getting The Facts About Salt Brine

What is Salt Brine?

Salt brine is water saturated with sodium chloride, or more simply,  salt dissolved in water. It is part of Westfield’s anti-icing program to take a proactive approach to controlling snow and ice on Westfield’s city streets.

When Is Salt Brine Used?

Pre-treating is a snow fighting strategy used in anticipation of road/bridge frost or warmer winter storms (normally above 20o F).  Salt brine can prevent frost for up to three days.  If applied just before a winter storm, salt brine will begin working as soon as the first snowflake falls and will delay the accumulation of snow and ice on the pavement.

Once a winter storm is in progress, salt brine is sprayed onto the rock salt, as it is applied, to accelerate the melting of the snow and ice.  This process activates the rock salt and helps it stay on the pavement instead of bouncing off the roadway.  Pre-wetting with salt brine in this manner helps reduce the amount of rock salt that Westfield must use overall.

Why Does Westfield Use Salt Brine?

Salt brine costs roughly 1/10th of other liquid chlorides.  In addition, salt brine allows Westfield DPW crews to be proactive and get a jump-start on winter storms.  This means that Westfield DPW crews can have entire routes pre-treated before the driving conditions decline and the snow and ice will be prevented from bonding to the pavement surface – which is the main purpose of an anti-icing program.  As a result, the roads return to bare pavement much quicker once the storm has ended.

How is Salt Brine Applied to the Road when Pre-Treating?

Motorists can expect to see Westfield DPW crews pre-treating the roads with salt brine using specially modified tanker trucks or units that mount to the plow truck. Most of this equipment is capable of spreading salt brine over one, two, or three lanes of pavement.

What Should I do When Following a Vehicle Applying Salt Brine?

Vehicles applying salt brine usually travel at speeds of less than 40 miles per hour.  Motorists should stay back at least 100 feet from the vehicle.

When Does Westfield Use Other Liquids?

The effectiveness of sodium chloride (rock salt or salt brine) decreases as the temperature drops.  Therefore, as storms become colder (usually below 20o F), snow fighters must use chemicals that work more effectively at lower temperatures to pre-wet the rock salt.  Liquid calcium or magnesium chlorides are the most common options.  Presently, Westfield uses a versatile effective winter liquid composed of a blend of magnesium chloride and feed grade molasses and meets the stringent requirements of the PNS (Pacific Northwest Snowfighters) for corrosion, toxicity and performance.

Getting The Facts About Salt Brine - Flyer 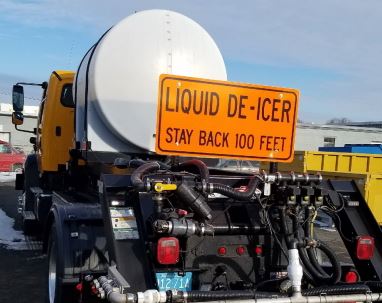